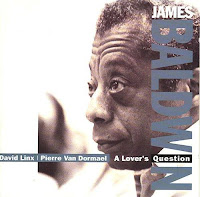 "A Lover's Question" is a jazz cd made with James Baldwin, David Linx, Pierre Van Dormael and 15 musicians between 1985 and 1987. The cd was released for the first time in 1990 and re-released in 1999 with the entire Jimmy's blues book as a bonus. – à New York.

The CD is accompanied by a 150-page, bilingual book offering essays, pictures and several of Baldwin's late (and excellent) poems. As a listening experience, the album is more engaging than most spoken-word projects with Baldwin speak-singing his poems while bubbling, sympathetic arrangements surround his voice.


Sure, he could write. But is this really the father of hip-hop?
James Baldwin is remembered as a novelist and poet. Now you can hear his words set to music on a new CD By Garth Cartwright /The Independent august 2000
Viktor Lazlo and the Band :

Baldwin, the American black gay poet, novelist and political activist who died in 1987, is remembered for his books exploring politics, homosexuality and life in the middle of the 20th century. From 1955's Go Tell It on the Mountain - a largely autobiographical account of his teenage years in Harlem - to 1956's Giovanni's Room and Another Country (1962), Baldwin's work consistently challenged the prejudices anchored in US society. 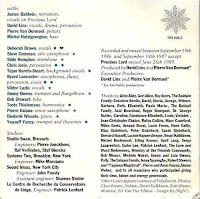 David Linx, the musician in question, first met Baldwin in 1980 when he was just 15. The lanky Belgian teenager stumbled into the milieu of friends, family, lovers and hangers-on which surrounded Baldwin in his exile (the young American had moved to Paris in 1948, buying a one-way ticket with the prize money afforded by a Rosenwald Fellowship). A year later Linx moved into Baldwin's house in the French village of St-Paul-de-Vence outside Nice and remained there until the writer's death. In late 1986 he convinced Baldwin to enter the recording studio with himself and several other Belgian jazz musicians. Sessions were recorded in Brussels, Paris and New York over the following seven months. Baldwin read poems while Linx and company built a funky, elastic jazz backing. These sessions are the ones featured on A Lover's Prayer.
So why the delay? Linx, now 35 and a noted jazz vocalist, smiles and shrugs. "After his death I went into a couple of years of denial," he says. "I did issue the album in France briefly in 1990 and then withdrew it. Since then, a lot of people asked me to release it and, basically, I didn't want to let it go. Last year I talked with his sister, Gloria, who's the executor of the estate, and we decided to do it properly with the photos and poems." 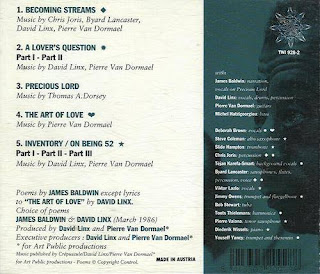 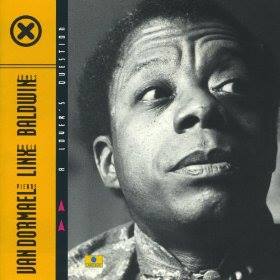 This addition of music isn't surprising, for Baldwin was always the most musical of speakers. As a teenage preacher in Harlem, he had attracted record crowds to hear him eulogise the Gospels. Nor was his writing impervious to the influence of music. Indeed, Baldwin's fictional writings on music remain some of the finest in literature: his 1957 short story Sonny's Blues engages the jazz musician's art in a way very few writers ever get near to. Little wonder that Miles Davis was a lifelong friend.
"His writing was very close to jazz," affirms Linx. "James had a sense of improvisation and with him, as with many writers, there was the wish to be a musician." Indeed, Baldwin once wrote that he had modelled himself on jazz musicians rather than other writers - especially on Miles Davis and Ray Charles - who "sing a kind of universal blues".
The lyrical, questing spirit of A Lover's Question echoes recent work by Courtney Pine and Cassandra Wilson - again, Baldwin's is a contemporary voice. And when Baldwin sings unaccompanied the gospel standard Precious Lord he evokes deep Harlem roots, his voice suggesting the spiritual strength needed to overcome the many obstacles he had faced.

"I remember we were sitting out on the terrace one night looking at the stars and listening to Robert Johnson and James started singing Precious Lord," recalls Linx. "I was struck by the purity of his voice and was determined that I would record it."
And what made Baldwin trust a 21-year-old wannabe jazz vocalist? "He was a truly generous man to all his friends, no matter what their skin colour. I'm amazed at how he trusted me. It's the innocence of being young... I felt so confident, I directed this great man and never hesitated at saying, 'Stop. Let's try it again.'"
A natural question to ask is about the relationship between Linx and Baldwin, a much older gay man. "It was like father and son. He called me 'son' like I was the son he never had," explains Linx. But were they lovers? "No. OK, we slept together a few times. But the age difference and... " Linx trails off, then adds: "That's not important and not something I really wish to discuss."
Baldwin regularly fell in (unrequited) love with famous friends, including Marlon Brando and Billy Dee Williams. At the same time, he possessed a great empathy for all he encountered. Whether answering Nobel prize-winning novelist William Faulkner's views on desegregation (Faulkner prescribed shooting negroes) or profiling loathed heavyweight boxer Sonny Liston, Baldwin always searched for a common humanity.
With Liston he found a man "aching for respect and responsibilities" rather than the monster the white media played up. Appropriately, respect and responsibility were themes Baldwin turned to time and again.
"When you read Baldwin you have to face yourself," says Linx. "As a man you have to ask yourself 'what kind of man am I?' He was extremely intense to live with and we laughed a lot. He was always young - I remember sitting with him waiting for the new Michael Jackson video to be shown on TV and he was really excited."
Baldwin was highly active in his last years. He lectured in US universities. President Mitterand presented him with the French Legion of Honour. He wrote fiction, essays, poems, plays and campaigned against apartheid. His last book The Evidence Of Things Not Seen found him back in America's Deep South using the Atlanta child murders as a starting point for a debate on the static situation of African Americans. But the result, Brilliant as Evidence, US publishers didn't want to know.
"Americans are so much about self-glorification and James held a mirror up to them showing a lot of faults and insecurities, and they hated it," states Linx. "People try and call him bitter but James was always full of love. He was angry, but never bitter."
Was Linx aware that Baldwin was dying of cancer during the recording of A Lover's Question?
"In retrospect I felt it. I remember he was extremely worried about finishing things. But even at the end I never saw death in his eyes."
Baldwin's funeral in New York drew thousands of mourners, and writers from Maya Angelou to Toni Morrison spoke of his profound impact on their own work. Amiri Baraka said in his eulogy, "This man travelled the earth like history and its biographer. He reported, criticised, made beautiful, analysed, cajoled, lyricised, attacked, sang, made us think, made us better, made us consciously human."
"He's so universal and even more relevant now," says Linx. "In France there's so much interest in his work and the response to A Lover's Question is amazing... People are saying it's the roots of hip-hop. We haven't released it in the US yet, but I'm looking forward to their reaction. Will they still be scared of him because he was gay or will they embrace him as a pioneer?"

"A Lover's Question" is a jazz cd made with James Baldwin, David Linx, Pierre Van Dormael and 15 musicians between 1985 and ...